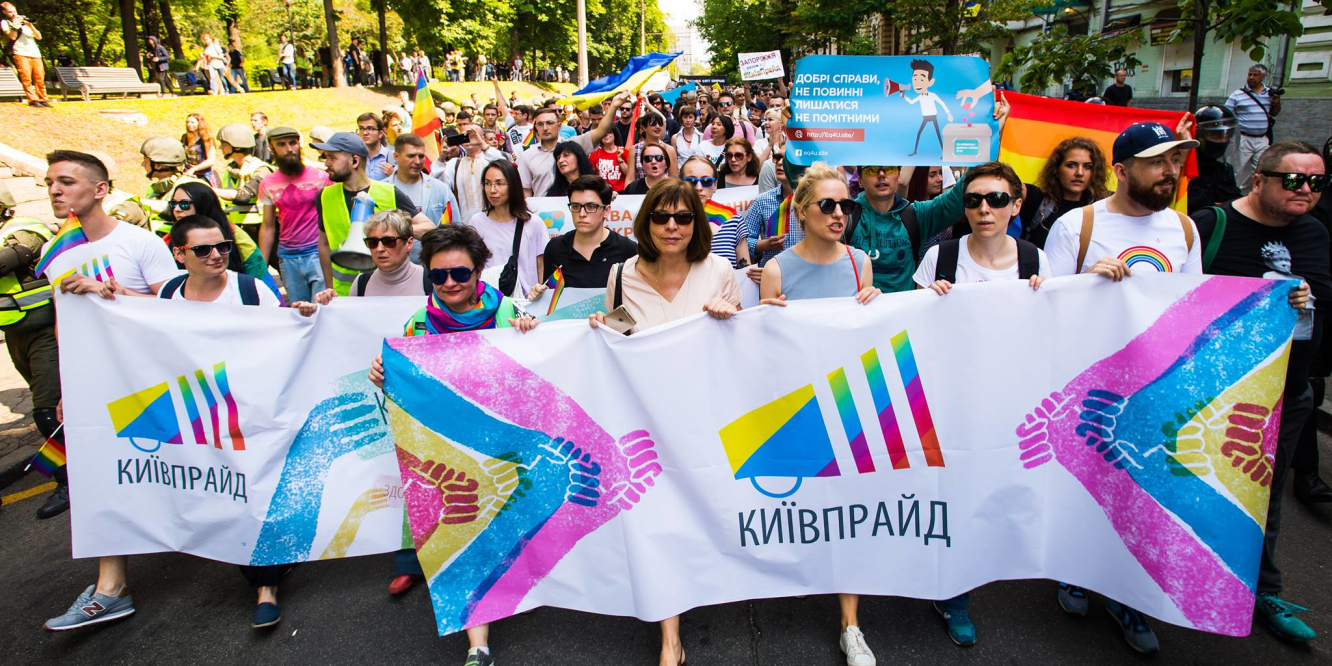 The Ukrainian Parliament is currently examining three draft laws concerning hate crimes, based on sexual orientation, gender identity (SOGI) and religion. Many fear that the bills will be covered up under pressure by pro-Russian political forces.

Last week, activists from Nash Mir (Ukraine’s oldest LGBTQ-organisation) wrote a letter to the president Volodymyr Zelensky, prime minister Denys Shmyhal and the MPs in the Ukrainian Parliament: “Religious activists, church lobbyists and representatives of Ukrainian churches have launched a disinformation campaign about the content and direction of the hate crime bills, manipulating and openly lying for the sole purpose of preventing the adoption of the law.”

“Only those supporting traditional values and Russia are vocal. The pro-European deputies stay silent”, the letter continues.

“Bill 3316-1uses almost exactly the same text as Bill 3316.”, Andrii Kravchuk (Nash Mir) explains. “Only the words ‘sexual orientation or gender identity’ are replaced by ‘the institution of family or family values’”.

“I was told that the Chairman of the Parliamentary Committee on Human Rights Dmytro Lubinets and his colleagues in haste submitted two other bills: Bill 3316-2 and Bill 3316-3. These two bills support the LGBTQ-community. They were afraid to lose face.”

“We support Bill 3316-2 since it is plausible one to be accepted.”, Kravchuk concludes.

“The vote over Bill 3316(-2) will be important to asses how serious Ukraine is about getting closer to the European Union.”, political scientist Rémy Bonny argues. Two years ago, Bonny wrote a thesis on the intersection of LGBTQ-rights and Europeanisation processes in Ukraine.

“My contacts in the European diplomacy have always guaranteed me that the execution of Ukraine’s National Human Rights Strategy is vital for further close cooperation between the country and the European Union.”

“President Zelensky obviously tries to have a modern and pro-European image, but certain members within his party (Servant Of The People) also support anti-LGBTQ forces and are split between Europe and Russia.”

“Russia is waging a military and information war in Ukraine. ‘Traditional family values’ and religion are an inherent part of how Russia’s autocratic leadership is constructed. They see ‘traditional values’ as ‘Russian values’. Organisations like the Russian Institute for Strategic Studies are full-time working in Ukraine on spreading conservative family values and attacking the LGBTQ-community through disinformation campaigns. The Russian oligarch Konstantin Malofeev is one of the biggest supporters of the international anti-LGBTQ network (see for instance) and the Russian support for the rebels in the civil war in Eastern Ukraine.”

“LGBTQ-rights are not only crucial for the LGBTQ-community, but also the security and sovereignty of Ukraine depends on it.”, Bonny concludes.

After months of (bloody) demonstrations against the pro-Russian president Viktor Yanukovych, Ukraine underwent a pro-European revolution in 2014. The EuroMaidan revolution brought a new president, the pro-European Petro Poroshenko. He finalised negotiations over an Association Agreement with the European Union.

Ukraine’s 2020 National Human Rights Strategy foresees the implementation of ‘a comprehensive and consistent legislation in the area of preventing and combatting discrimination’. The groups that will fall under this anti-discrimination law are being defined very broadly: ‘crimes committed for reasons of racial, national, religious and other intolerance’.

The Action Plan to implement the National Human Rights Strategy is more detailed: “Task 105.3: ‘Providing punishment for hate crimes under motives of such grounds as race, skin colour, religious beliefs, sexual orientation, transsexuality, disability, language (amendments to para. 3 of Article 67, to parts 2 of Articles 115, 121, 122, 126, 127, 129, Article 293)’. This task had to be implemented already in 2016. In the most 2019 report of Nash Mir, they explain the whole history.

An amendment to the labor code has been approved to ban discrimination on the grounds of sexual orientation and gender identity in 2015. If Ukraine wants to adhere tis own and international commitments, a hate crime law needs to be added to the criminal code by the end of this year.

Rémy Bonny is a political scientist and LGBTQI activist from Belgium. He is a specialist in the way the LGBTI-movement’s demands construct international relations – specifically in Eastern Europe and Central Asia.

In recent years, Rémy has been conducting research to the interactions between illiberal states like Vladimir Putin’s Russian Federation and the European Union and former Soviet Republics. Therefore, he has been living in Budapest, Brussels, Warsaw and Venice.

As an advocate and researcher in LGBTQI-Politics, Rémy travels around the world to talk to LGBTI-organisations, high-level policy makers and academics about his research and the situation in their countries and in the EU.

His work has been recognised by many international media and institutes. He was one of the speakers privileged to speak during the official 50th commemoration of the Stonewall Uprising in New York City.