Eurovision 2017, Our activities, Situation of LGBT in Ukraine

Ukraine was the first of the post-Soviet states to decriminalize consensual gay sex. The relevant law was one of the first of the new state’s legal acts. Then the situation of the Ukrainian LGBTI community virtually froze for long years. Almost nothing changed in legislation and public attitudes towards LGBTI people even worsened, evidently because of the ever-growing influence of the country’s main churches, both Orthodox and Greek Catholic. Only the deposing of Yanukovych’s pro-Russian administration and real reforms tending toward European integration initiated visible changes in Ukrainian LGBTs’ legal and social situations.

In November 2015 the Ukrainian government adopted the Action Plan to Implement the National Strategy of Human Rights until 2020. It became the first state policy to approach modern Western standards for human rights in many spheres of life. For many vulnerable social groups, including LGBTI people, it was quite a revolutionary one. Under the plan, within three years the Ukrainian legislation and state policies had to implement top necessary measures acknowledging the interests and legal rights of LGBTI people. Included were criminalization of hate crimes from motives of homophobia and transphobia, explicit prohibition of discrimination on grounds of sexual orientation and gender identity in all spheres of public life, introduction of civil partnership for both opposite-sex and same-sex couples, simplification of gender reassignment procedures, and much more. After one year of the Action Plan’s realization we can draw initial conclusions about its actual adoption.

According to estimations by Ukrainian human rights organizations the Action Plan’s implementation does not exceed 20%, total level.  Likewise for its LGBTI components, but here the situation is much worse than in other fields because up to the present LGBTI community interests have been almost completely ignored in Ukrainian legislation and state policies. The only real development in this sphere during the previous two decades was the addition of sexual orientation and gender identity (SOGI) as protected grounds in labor legislation in 2015, becoming possible only because of constant pressure from EU institutions. While other vulnerable social groups in Ukraine already have some level of recognition and protection from the state, LGBTI people still remain mostly disregarded and stigmatized. The Ministry of Justice already refused to mention SOGI explicitly in the general anti-discrimination law, the Ministry of Interior tries to avoid amending the Criminal Code according to the Action Plan’s provisions on hate crimes, and the only visible success was achieved in changing the rules of gender reassignment. After Uliana Suprun became Acting Minister of Health in 2016, her ministry swiftly started to take up tasks the Action Plan placed on it which had been completely ignored by this government institution’s previous leadership. Thus, obviously the realization of the plan’s provisions depends entirely on the presence of our country’s political leaders’ good will.

Alas, this will is evidently absent. The most important LGBTI provision of the Action Plan consists of  developing a draft civil partnership law available for same-sex couples (as well as for opposite-sex ones (but the latter already have the option of ordinary marriage). The law is due now, in the second  quarter of 2017, yet the Ukrainian government still has not even decided which of two ministries – Justice or  Social Policy – is responsible for this task and both institutions refuse to implement it! So far only Ukrainian LGBTI and human rights organizations, Nash Mir Center above all, are engaged in pressing  for action. We offered our expertise and have even drafted a text of the planned bill to help the government, but every time we’ve encountered only indifference and the officials’ total disregard of their obligations.

Nevertheless we do not give up. Nash Mir Center already has twenty years’ experience protecting and advocating LGBTI rights in Ukraine.  We developed along with the young Ukrainian democracy, we fought for freedom and equality in the first Maidan – the Orange Revolution – and in the second Euromaidan’s Revolution of Dignity. Only after the latter, after the final victory of the pro-European forces over the pro-Russian ones in 2014, have we seen how Ukrainian political parties, society and government began to change their attitudes toward LGBTI issues. A window of possibilities appeared for rapid modernization of Ukrainian society and emancipation of the Ukrainian LGBTI community, so we cannot afford to lose this signal chance!

All this became possible only through development of civil society in Ukraine and the permanent efforts of our Western partners pressuring Ukrainian authorities. Also, one cannot underestimate the influence of changes that happened in Western society and politics during recent decades: the emergence of new international standards of LGBTI rights. Nash Mir Center tries to use every available domestic and international instrument to push the process of realizing these modern standards regarding LGBTI and general human rights issues. Thus, we utilize not only political pressure exerted upon the Ukrainian government to ensure adoption of necessary legislation, but also we resort to strategic litigation by suing Ukraine in the European Court on Human Rights over the absence of any legal form that recognizes same-sex family couples. We hope that these tactics of ours (proven by others to be successful in cases against Greece and Italy) will eventually prompt the Ukrainian government to carry out its obligations and adopt a law on registered partnership.

Besides these activities, Nash Mir Center also carries on permanent efforts to protect and serve the interests of the Ukrainian LGBTI community, primarily by monitoring violations of human rights and providing legal assistance to such victims. For instance, a more detailed report on our activity against hate crimes can be found in KyivPost’s previous issue, just look for the article The hate that dare not speak its name. Those interested in the situation of LGBTI people in Ukraine can also find up-to-date information at our website gay.org.ua. Donations are welcomed. 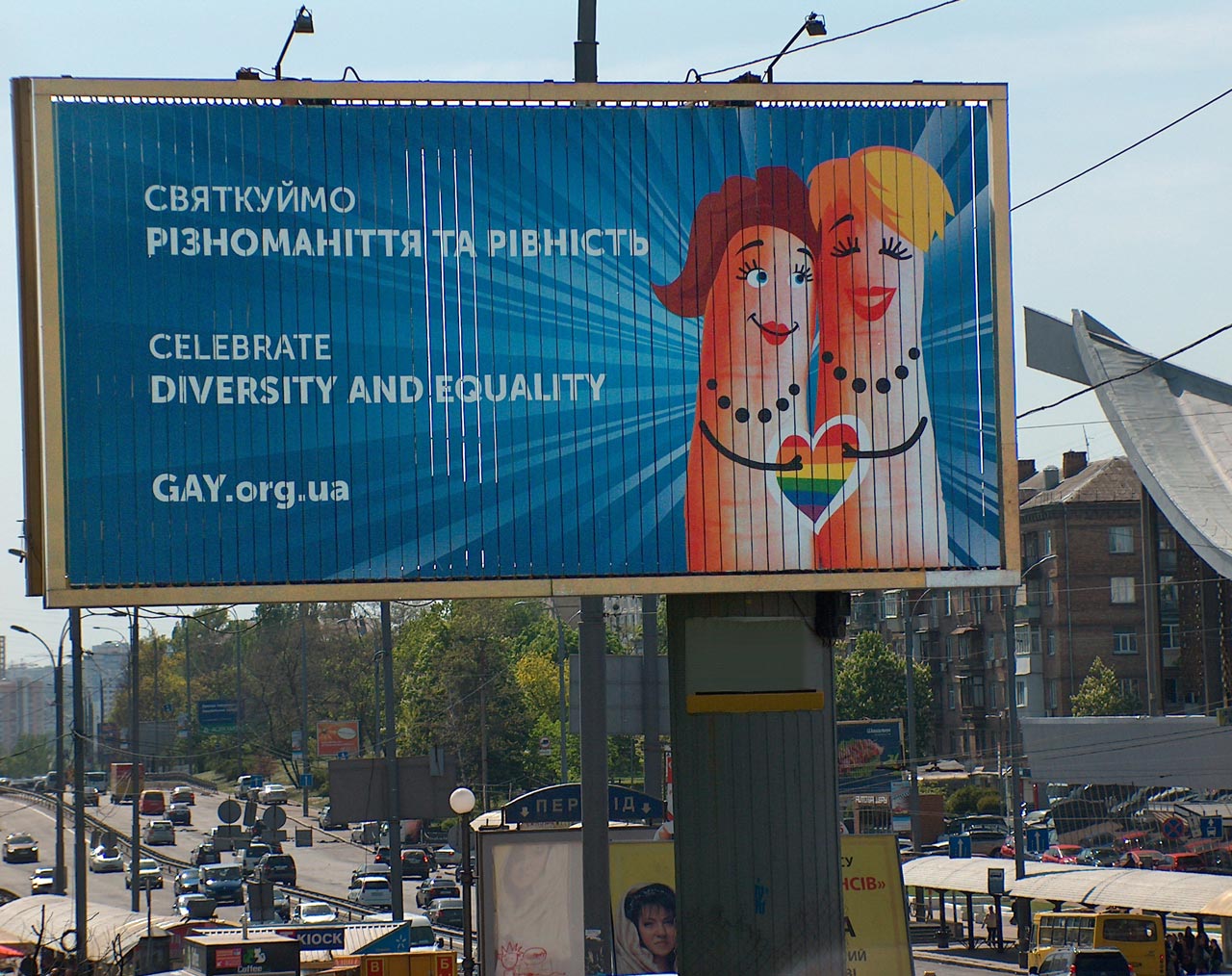 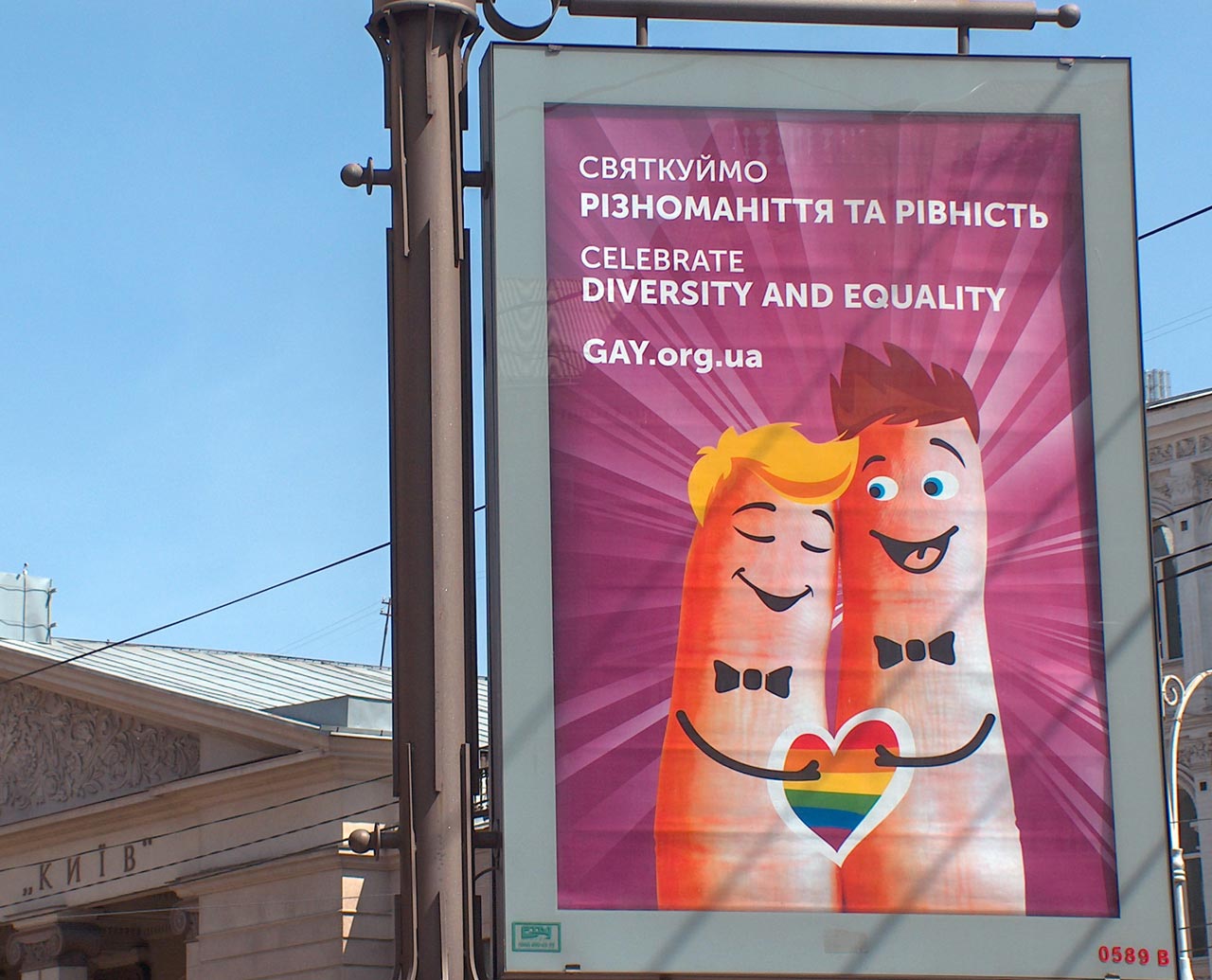