UKRAINIANS HAVE DRAMATICALLY IMPROVED THEIR ATTITUDE TOWARDS LGBT PEOPLE

In May of this year, Nash Svit Center decided to repeat the survey of Ukrainians on their attitude to LGBT people, which was conducted for us by the Kyiv International Institute of Sociology in 2016. Of course, the representativeness and accuracy of opinion polls during the war probably differ from peacetime, so in the report on the 2022 poll, KIIS sociologists devoted much space to methodological issues, but came to the comforting conclusion: “In the end, in our opinion, we have to talk about some decrease in representativeness and increase in error (in addition to the previously mentioned formal error, a certain systematic deviation is added due to the above-mentioned factors), but the results still remain highly representative and allow to reliably analyze public sentiment.”

Indeed, the results of the 2016 and 2022 surveys are so different, and the changes so unambiguous, that it is simply impossible to explain them by statistical error. As expected, Ukrainians have demonstrated a global trend toward increasing acceptance of their LGBT fellow citizens. The results are surprising in the speed of change: in six years since the previous survey, the number of LGBT-friendly responses has increased in two to five times! One can only guess what was the reason for such a rapid progress — perhaps the Russian invasion, carried out under the slogans of defending “traditional values”, fighting “gay parades” and the European choice of our nation. Ukrainians have clearly seen what the Russian World brings to us and who are our true friends and allies.

However, these are just guesses, and the facts are the results obtained by KIIS sociologists. Thus, in the last six years, the number of those in Ukrainian society who have a negative attitude towards LGBT people has decreased by 1.5 times (from 60.4% to 38.2%), the number of those who have a positive attitude towards LGBT people has quadrupled (from 3.3 % to 12.8%), and of those who are indifferent to them — increased by one and a half times (from 30.7% to 44.8%).

How do you feel about LGBT (homo / bisexual and transgender) people in general?

In this case, indifference is a positive factor, because it means no prejudice against this group. Thus, the vast majority — about two thirds — of Ukrainians accept LGBT people as they are.

As expected, young people aged 18-29 have the most tolerant attitude towards LGBT people: 24% have positive attitude, 58.8% — indifferent, and only 16.9% — negative. There was no significant difference among the regions of Ukraine in this issue. Among the various professions / occupations, the most tolerant of LGBT people are students that is understandable — they belong to a younger generation, as well as, unexpectedly, the military and police. Retirees are the most intolerant.

The second question concerned equality of rights for LGBT people. Since 2016, the share of those who declaratively support their full equality has doubled (from 33.4% to 63.7%), and the share of those who believe that LGBT people’s rights should be in some way restricted has almost halved (from 45.2% to 25.9%). Similarly, the number of those who hesitated to answer halved: from 21.3% to 10.4%. In words, two thirds of Ukrainians now support full legal equality of LGBT people. As expected, the level of support for LGBT equality is higher when the respondent is younger, more educated, and wealthier, as well as among residents of large cities.

In your opinion, should LGBT people in Ukraine have the same rights as other citizens of our country? 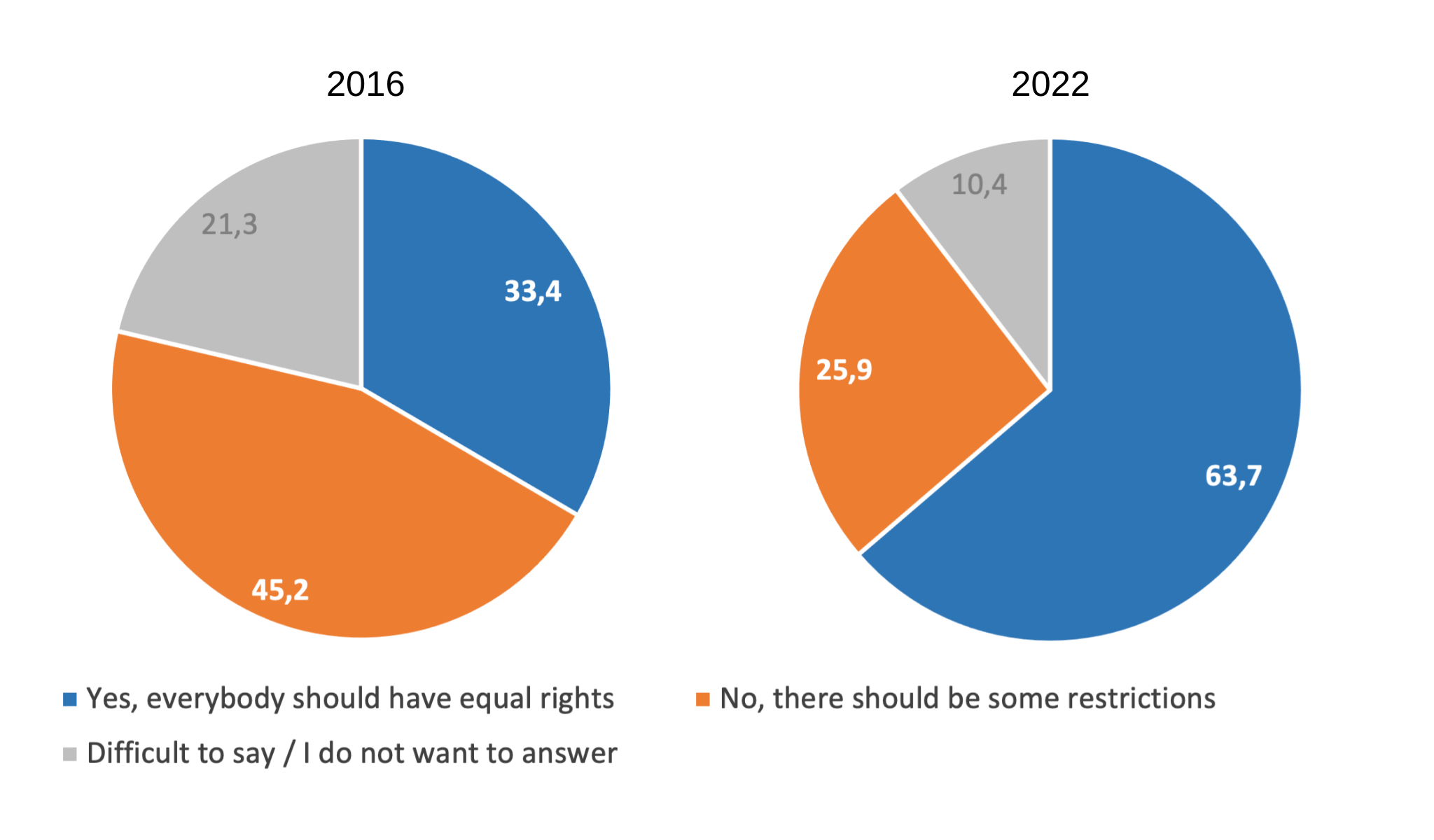 In the previous paragraph, the support for equal rights for LGBT people was rightly described as “declarative” and “verbal,” because, in order to test the understanding of the essence of equality, we specifically added a control question on the recognition of the right of same-sex partners to family. Realizing that the long-standing propaganda of homophobia probably sowed a negative reaction in Ukrainian society to same-sex marriages and adoptions of children by same-sex couples, we formulated it in the most acceptable for the general public way, removing these stimuli: “Do you support the introduction of registered partnership for same-sex couples similar to regular marriage but without the right to co-adoption of children?” As in 2016, in 2022 the majority, even among those who ostensibly supported full legal equality for LGBT people, denied them the fundamental human right to respect for private and family life.

However, significant progress is obvious here as well: if in 2016 only 4.8% of respondents supported this right, now those are 23.6%, almost five times more. Together with 27.1% of those who do not care, they already make up the vast majority of Ukrainians and significantly outnumber 41.9% of those who oppose the recognition of even limited marital rights for same-sex partners. Ukrainian churches and conservative politicians should learn that the majority of Ukrainian citizens do not object to the legalization of same-sex civil unions. In the younger age groups, from 18 to 39, the recognition of same-sex couples’ family rights is supported by even a relative majority, and together with those who do not care they are twice as many as those who oppose it.

Do you support the introduction of registered partnership for same-sex couples similar to regular marriage but without the right to co-adoption of children?

Finally, the last question in the 2022 poll was completely new: “How do you feel about the participation of LGBT people in defending Ukraine from Russian aggression?” Two thirds of those polled answered yes, and only 11.4 percent were so homophobic that they denied their LGBT citizens even their civic duty and honorable right to defend their homeland from Russian invasion. Apparently, they simply secretly sympathize with the aggressor and form the nuclear electorate of pro-Russian parties, a real “fifth column” of Moscow in our society.

How do you feel about the participation of LGBT people in defending Ukraine from Russian aggression? 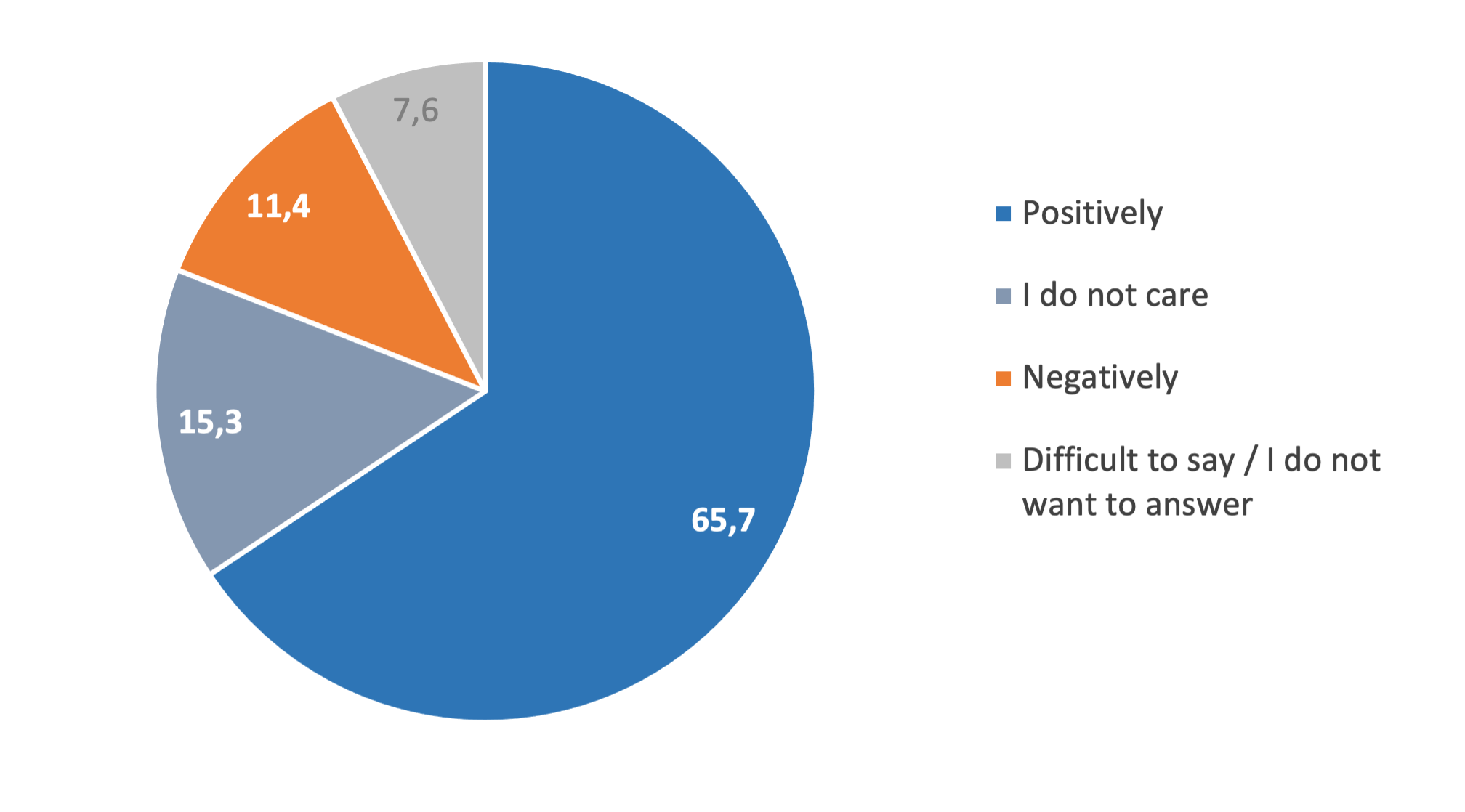